It’s late May. The last days of it, actually. The thought of upcoming summer doesn’t bring any excitement. She even regrets her favorite season ending and the thought of hot as hell days isn’t the most pleasant one. June 1. Everyone keeps talking about the first day of summer, but for her it’s nothing but just a date. The next few days is the same situation until one night. One night she can’t sleep. She opens the window and finally feels it. The fresh smell of the night makes her finally realize. The summer has come. She gets flooded with memories of different summers. And her world turns upside down. It feels like she goes back to her childhood. Or even earlier, she is taken to the world of late 70s or 80s. Everything suits this time, the music, the weather, her mood. She lives in a friendly neighborhood, in a detached house. Across her house is a big field with all the beautiful flowers. A river flows there and separates the field and the forest. She often goes there. On hot days it’s chill near the river. She just lies there, reads a book, or admires the nature. The clouds swimming in the air, the flowers and bunches of trees moving from the wind, butterflies flying and trying to catch each other and life going on and on. She can feel two heartbeats in sync-her heartbeat and the one of the Earth. She often watches the most fascinating sunrises and sunsets, and it seems as they’re getting more and more beautiful every day. The rays of sunshine invade her room every morning, but it’s a friendly invasion. The plants of the room seem to gain energy from sun and so does she. She sits on the porch with a lemonade or fresh fruits and gets little sunbathes. The sun warms not only her body but also her thoughts and feelings. It’s like it goes inside her and destroys every single negative thing. She loves that process. It feels like resurrection after each morning. Then it comes the most hated part of the day, midday, when it gets really hot, but it doesn’t matter now for her. She always finds something creative to do. She often tries to draw the flowers of her yard or the scenery outside of the window. Sometimes she goes to the garage to help her parents allegedly, but in reality she just adores watching her old stuff like toys, magazines and pictures. The dusty boxes are not dirty or old for her, they were a part of her life, they’re full of memories. The little walks to the nearby grocery store seems boring at first sight but it always gets full of some events. The children playing on the peaceful streets make her remember her own childhood, her friends and games they used to play. She even asks the kids to throw a ball once and all the memories get even stronger. She tries to notice all the small things which inspire her. Tries to catch a butterfly or to stroke a dog. Summer evenings happen to be the best. Sun starts to go down slowly and colors the sky in the best shades. Everyday the color of the sunset and the sky is different. It can be all pink and purple, mysterious, like it’s the end of world. Or it’s all orange and bright yellow, the true colors of summer, when you feel warmer than ever. People come back from their jobs and it’s dinner time. It’s really peaceful in the streets. After dinner all the children rush to the streets not to miss even a minute of their playing time. Parents also go out, men drink beer, play cards and women exchange the latest gossips of the neighborhood. She goes out too, has a little walk with her friends. They love goofing around and having fun. They always have some ideas or to do lists for the summer. The mutual dreams or plans bring them even closer and more excited. Even if they don’t fulfill all these plans, it’s still a part of early summer. Thinking about the fun they’ll have. They also recall their past, the happy careless days they had. Cause that’s what summer does. It makes people remember stuff from their lives. For most people it’s mainly happy and bittersweet memories. She goes home then. She feels inspired. Nothing really happened throughout the day but she feels on the top of the world. She lights up some candles in the balcony, cuddles in a blanket, puts on some music and watches the wonderful day ending. The lights turn on in all the houses, the moon rises and it’s the best time of the day. The time of all her dreams and different imaginations. What she hasn’t had or done throughout the day, she does in her mind and it feels so real. Then the next day comes. Every single day is kind of the same, but still they are all different and special.

Then June slowly comes to its end. The most nostalgic and peaceful month of the summer. When everyone just enjoys that peace, doing nothing, being a lazy bones. The songs of this month are ballads, slow songs with no beats. But they all have too much inspiration. As July comes, the songs start to become faster. It gets hotter and everyone thinks about getting out of town. That’s what her family does. Taking a ride to the beautiful and not crowded places of the country. She enjoys these little trips. Headphones in her ears, wind messing up with her hair, sun glares happening every now and then. They find a beautiful place, have a walk around. She loves exploring. Every new thing widens her worldview and way of thinking. Every new tree or rock or church plays a big role in her history. Her summer movie becomes richer and more saturated with all these little trips and picnics. She finally starts to fulfill her to-do list. Having a sleepover, playing outside, trying something new, cooking, having a dance party… These are the moments she will never forget. She also is looking forward to the family holiday in August. Watching all the beautiful places of the country they are going to, thinking about photo ideas and fun activities. It’s the most tempting part of the summer. She wants August to finally come but she also doesn’t want the time to fly faster.

The music turns into pop now. It has all the great beats to dance to. And it’s August. The last but the richest month of summer. It feels like it has much more than only 31 days. The family holiday turns out to be the best one she had for many many years. It’s chill but active at the same time. So many new things happening that she doesn’t want them to stop. New games, new activities, new people. She is experiencing all the various feelings and thoughts she never had. The days are always happy and fun. Sun shines brighter than ever, she finally has the suntan she wanted all summer. She loves swimming. Catching every single wave, feeling the inherent part of the sea. The sand then welcomes her with his hugs, warming her thoroughly. Evenings have a whole other mood. Peaceful and romantic but also philosophical. She stays up till midnight with her friend, talking about literally everything. About the day, the holiday, the life in general. No problems are allowed here, they are left far behind. The only existing problem here is the thought of leaving. That’s the most awful thing that they try not to think about. As though if they don’t think about it, it will go away and they will stay there forever. On the island in the sun. Where everything and everyone is perfect. But sadly that’s not how it happens. Days fly incredibly fast, and 14 days already passed. But it felt like a whole world and life. Like she was living there her whole life. Going back is always the hardest part. She may even drop a tear watching old photos and listening to sad songs. And that’s how the songs are now. Even the happiest songs are sad for her, because that period of the song has passed and nothing can bring it back. She goes back, the world she has doesn’t fascinate her for a while, as her thoughts are far far away in warmer places. But time goes by and gets happier than ever, thinking about the best time she had. The fun doesn’t end here. Lots of relatives and friends come home and there are lots of gatherings. She still has her walks but now not in the neighborhood but in the centre, as things get more interesting there. She missed the little cozy cafes, tourists in the city, the atmosphere of eternal holiday. That’s what she likes about the centre. It’s like an infinite summer there, which will never end. She stays up longer than ever, in order not to miss a single second of summer. She gets now all into music. Late guitar or piano playing creates a different air of summer and art. She literally feels herself the heroine of her own movie. The perfect movie of the perfect summer. With a nostalgic beginning, fun midpoint and a romantic end. She can feel the conclusion of her story coming up and she does her best to make it the greatest ending ever existed. The songs turn again to slow ballads, but they don’t make her sad. They fit this period the best. She doesn’t regret summer ending. She is excited for new season and new adventures. She already thinks about all the perks of autumn, and even winter.

The last day of summer. Like June 1, it doesn’t matter to her, it’s like a normal date. But still she can’t help but watch all the photos and videos and the summer. The vintage June, active July and busy August. All the walks she had with her friends. All the time spent with parents and relatives. All the songs she listened to through the summer. All the new things she learned, new people she met, all the changes and character development she had. All the plans and dreams which are now felt to be fulfilled even if they weren’t. Everything was the way it should be. And it was perfect. She grew so much over the summer. From childhood and teenage years memories to the present days. It feels like the summer lasted a whole few generations and decades. And indeed it was an infinite period. And it totally doesn’t matter now whether all this happened in one summer, two or three. Or whether everything described was a reality or didn’t happen at all . This is what she has now. The recollection and the imagination of the perfect summer. That’s what matter. The End. 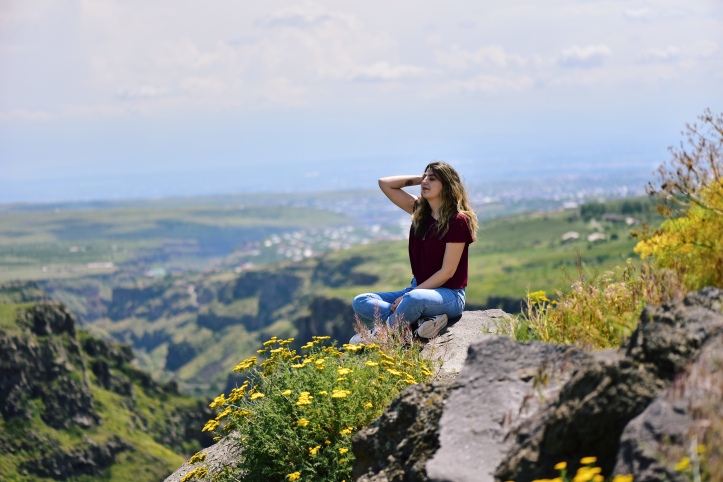